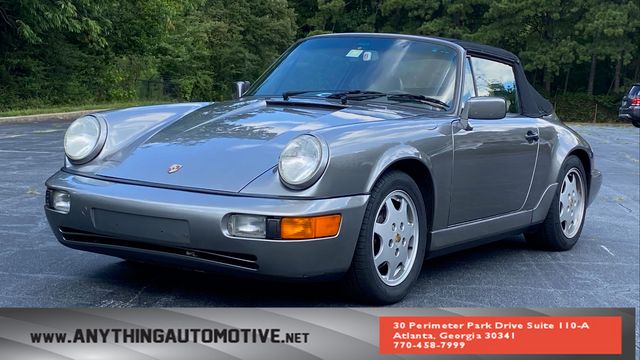 *This calculator is for informational use only and is based on the information you provide. Actual loan amounts and payments will vary based on additional items such as taxes and fees as well as the actual interest rate available to you from a financial institution.

Anything Automotive is excited to offer this 1990 Porsche 911 C2 Cabriolet for sale.  Now is the first time this car has been on the market since 1994, and it’s a rust-free garaged example.  It’s not perfect, but it’s a real nice example of a southern car.

The Porsche 911 originally was designated as the "Porsche 901,” however, Peugeot protested on the grounds that in France it had exclusive rights to car names formed by three numbers with a zero in the middle. Instead of selling the new model with a different name in France, Porsche changed the name to 911. Production began in September 1964, with the first 911s exported to the US in February 1965.  The 911 underwent a major evolution in late 1989 with the introduction of the Type 964, first introduced as a Carrera-2 in 1990.  The chassis was redesigned overall.  Coil-springs, ABS brakes, and power-steering made their debut, and the engine was increased in size to 3,600 cc and was rated at 250 hp.

This “Porsche family” traded a 1971 911T at Jim Ellis Porsche back in 1994 to get this rear-wheel drive Carrera 2, and it’s been in the family for almost 30 years since.  Finished in a beautiful and rare STONE GREY METALLIC outside, and it has the faithful beige leather inside.  The rear-mounted air/oil-cooled 3.6L flat-6 is paired, thankfully, to a 5-speed manual transmission.  Standard features include power windows, mirrors and door-locks, central-locking system with alarm, automatic climate control, an AM/FM/CD player, and a power folding convertible top.  This car also features fully powered drivers seat.

There have been two previous trips to the body shop, one to fix a small dent in the front from a parking-lot bump in 1995 and one small slow-speed fender-bender in 2007.  Both issues were fixed right here locally-owned BAP.

Your purchase of this vehicle includes books/manuals, 1 key, and full set of floor-mats.  It will also be delivered clean and full of gas.

Why buy from us? Anything Automotive specializes in hard-to-find desirable cars and is proud to offer this example.  We have been providing quality cars to our clients in the Chamblee area for over 20 years.